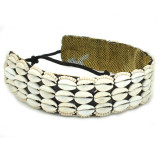 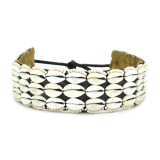 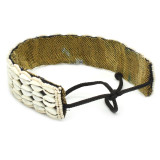 Cowrie shells come from a group of small to large sea snails. The scientific name Monetaria moneta, is translated from the Latin meaning "monetary money", hence the nickname of the "money cowrie." The cowrie shell has many uses and meanings. They are and have been used for currency, jewelry, religious accessories, decorative and ceremonial purposes. The shells, found in the islands of the Indian Ocean, are used around the world. Cowrie shells have a shiny, smooth, semi-translucent appearance. The word porcelain has the same characteristics and derives it name from the old Italian term for the cowrie shell (porcellana). According to African legend, the shells also represented a divine power, particularly from the mother Goddess, or spirit of the ocean. Cowrie money was the first widely adopted currency and became the backbone of the trade networks of Africa and Asia. West Africa actively promoted the adoption of cowrie money and were so successful that the contemporary currency of Ghana, the cedi, is named after the Akan word for cowrie. Throughout Africa, South and North America, the cowrie symbolized the power of destiny and prosperity. They were also used in ancient China, where excavations have found brass and silver carvings of cowrie shells, holding the symbolism for prosperity and monetary value. The first evidence of the cowrie's use as money can been traced to China as early as 1,200 B.C.E. The Classical Chinese character for money (貝) originated as a stylized drawing of a Maldivian cowrie shell and is now part of the modern characters for the words coin, buy, and tax. Cowrie shells were among the devices used for divination by the Kaniyar Panicker, a caste of astrologers of Kerala India, who are known to be a literate learned class.